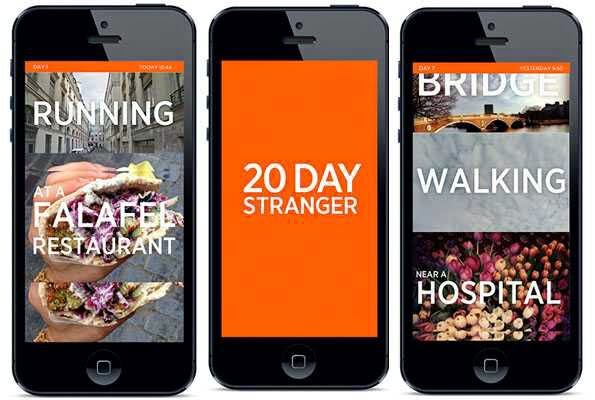 What do you usually talk to your friend over phone when he/she is separated by distance? Mine would be about the weather, what-did-you-do, where-n-all-did-you-go, blah, blah, blah.

But, is there reverse process possible? If you know such facts about a stranger, is it possible for you people to become BFFs..? That’s the idea behind the new app called “20 Day Stranger”.

Created by MIT’s Playful Systems Group, the app (now in beta testing) partners two people, who live as far away from each other as possible, in an anonymous digital pen pal scenario. Every day for 20 days, each person gets messages alerting them to vague details about their partner’s life: When he wakes up in the morning, where she’s going, what theweather is like where that person lives. You remain anonymous to each other the entire time, until day 20 when you get the chance to send one 400 character message.

“This app is about addressing a fundamental human question, which is: How can we become aware of all the people in the world who we are connected to but may never meet?” says Kevin Slavin, a professor at MIT and director of the Playful Systems Group.

This app won’t be so much creepy on you but, for example, instead of telling your partner you’re on the corner of 42nd Street and Broadway in New York City, they’ll just get a Google street view image of some place in the vicinity of Time Square.

This app aims to create a positive spin about anonymity telling the stranger about the texture of your life. This might even change the way we look at the social media.

But, this app cannot be made available worldwide as it has been made only for iPhone. Once it is made available on Android which holds 80% of world’s smartphone market, who knows what changes this app may bring on you!