An Army of Artificial Ants!

Ants have made man wonder at their capabilities for a long time. Now, its time for ants to wonder at man’s capablities! 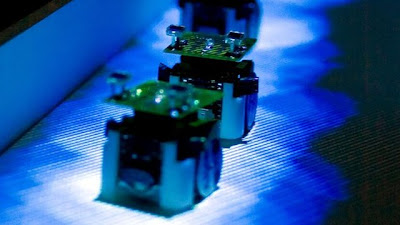 Scientists from US has accomplished building a tiny Robot that mimics the behaviour of the ants in many way although not in the look. These mini-machines are simple and are programmed to move forward towards a destination and avoid obstacles. But, what made them comparable with the ants is their ablity to follow each other towards their destination, jusk like how ants behave.

“Each individual robot is pretty dumb,” said Simon Garnier from the New Jersey Institute of Technology, lead researcher on the study. “They have very limited memory and limited processing power. By themselves, each robot would just move around randomly and get lost… but [they] are able to work together and communicate.”

This army behaviour of these machines are accomplished by a simple light sensor. Like how ants leave a trail of chemical which other ants sniff to follow, these machines leave a trail of light(accomplished by means of projector) which other machines sense to follow. These projectors leave a breadcrumb trail like the ants i.e., the intensity of the light increases when more ants pass over it just like how the intensity of the chemical increases when more ants pass over the same route.
Thus, these machines sense for the direction in which the light density is high and move towards that direction. Here is a video from the BBC News.

This creation shows great technology can be accomplished by observing simple things just like these scientists did!