5 Features that Windows 10 copied(??) from Ubuntu

Windows 10 is supposedly the most revolutionizing Windows series that has yet evolved. Its the user friendly hybrid of the PC-friendly Windows 7 and Tablet friendly Windows 8. But that not it! It has more features packed than ever that revolutionized the way Operating systems work.
Wait..!!
Did some of the features seems similiar?
Yes, it did. Atleast for me. Here is the list of some of the features that have been implemented in Windows but first heard out of Linux. 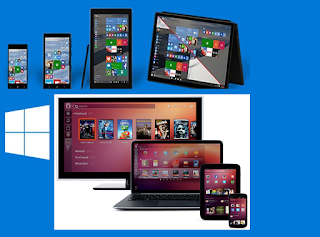 Windows decides to discontinue its idea to develop different OS for different devices. With Mobile phones becoming as powerful as desktops, its insane to keep them at different tracks. So, the upcoming Windows OS can support a lot of devices.

But, this one cool idea, wasn’t first born out of Microsoft. It was already being implemented in the Linux by Canonical. Here too, the same OS can run across all devices. 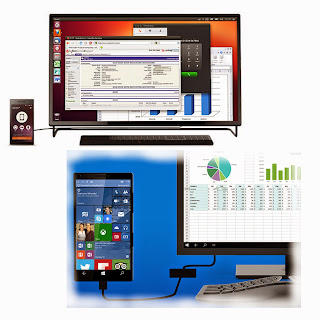 Windows 10 includes a handy “Continuum” feature that dynamically switches the interface between the PC-friendly desktop and a Windows 8-like mode that’s better suited for fingers (pictured above), depending on how you’re using the device.
In the same way, Ubuntu came up with the “Convergence” feature using which you can dock your phone to a monitor with keyboard and stuff to get a full blown PC and stuff.
Though Ubuntu was the firs to start the Race, Windows is the first to finish it! 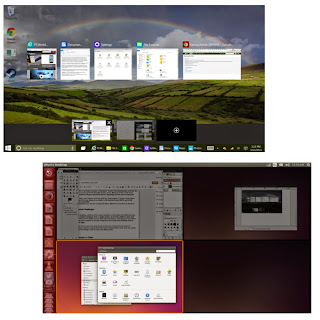 Virtual desktop, called as Poor man’s monitors, is the feature in which you can have a multiple desktops from a single system. Its just the ability to open and group softwares in different so called virtual desktops such that you can switch between them anytime to use the respective set of apps than fiddling with an array of apps.

But this feature has been long found in the Linux desktop in the name of Workspace and has actually been the most boring feature of all. But, yet, Linux was the first thing to tell me that such thing exists. 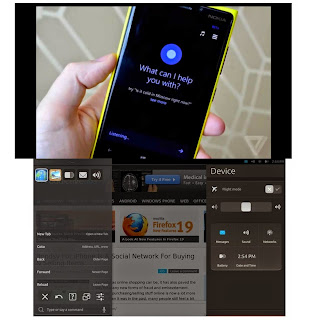 Cortana has become a lot familiar to people since its introduction in the mobile system. It is the complex hybrid of Google Now and Siri has been trying very hard (a fruitless war as of now) to beat both of them.

From Windows 10 has a big boost for her. Cortana will, from now on, be found across a large range of devices thanks to the One for all approach.

But, Canonical had already promised a similar feature using the HUD ability which searches both in app and online to find out what you need. But this promise was never realised while Cortana evolved into a working beauty! 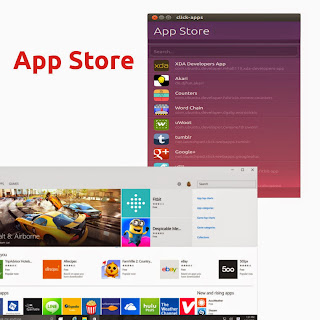 Both Windows store and Ubuntu software center aims to unite the devices under one simple store. While Windows is a half baked bread, Ubuntu is still going through the grocery list! Unless the bread is ready, one cannot determine who leads the way here.

While both systems try hard to beat each other with the new world features, its really too early to say who will win. While people say that the open sourceness of LInux will attract people than the Windows, this theory has never brought up a success story. Though the line for pioneer has already blurred, it wont even matter when the Winner wins!

Is my view correct? Did I convey wrong information? Or simply, you got something to tell? Please make use of the comments section.