Last month Google released the note taking app called Google keep for Android to quickly jot down your ideas and keep track of things while on the go with your Android device or on the web.

This simple note taking App organizes everything in a colorful tile interface. Each one shows you a preview of each note, whether it’s a photo, a to-do list, a single task, a saved webpage or whatever else. You can organize each to re-prioritize as needed, and you can add new notes with your voice. This also saves your notes in Google drive making sure it is available anywhere you go. 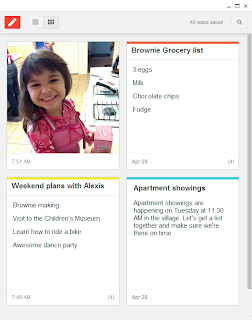 But, now, Google has made it available for all users by releasing it as an app for the Chrome Web browser. The Google Keep Chrome app launches in its own window, so you can create notes, cross out your to-do lists, and attach photos to tasks while you work on other things. And if you don’t have an internet connection, don’t fret: the Chrome app works offline because we all know that ideas (big and small) can be sparked at any time.

You can download it from the chrome web store.